You Don't Mess with the Zohan

An Israeli counterterrorism soldier with a secretly fabulous ambition to become a Manhattan hairstylist. Zohan's desire runs so deep that he'll do anything -- including faking his own death and going head-to-head with an Arab cab driver -- to make his dreams come true.

Zohan (Adam Sandler) pees on a friend's cat while aiming for the litter box. The stream is shown for about a second.

The unrated version features a second very quick scene of Zohan peeing on the cat. 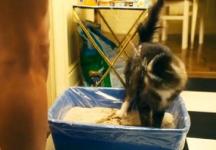