In 1978 in Hong Kong, a grisly murder takes place. Eight years later, on a Macao beach, kids discover the severed hands of a fresh victim. A squadron of coarse, happy-go-lucky cops investigate, and suspicion falls on Wong Chi Hang, the new owner of Eight Immortals Restaurant, which serves delicious pork bao. The hands belong to the missing mother of the restaurant's former owner; he and his family have disappeared; staff at the restaurant continue to go missing; and, Wong can't produce a signed bill of sale: but there's no evidence. The police arrest Wong and try to torture him into a confession. Can they make him talk? And what was in those pork bao?

The main character (Wong Chi Hang, a serial killer played by Anthony Wong) pees on his hands by a dumpster to wash his victim's blood off of them.

Later when Wong is in jail, another inmate beats him, shoves his face into a squat toilet, and stands over him and pees on the back of his head.

After the beating, Wong wants to drink his own urine to heal his internal injuries. But as he pisses into a cup, he realizes there is blood in it so he dumps it out into the toilet. He then asks another inmate to pee in the cup for him, and he forces it down as the other inmate asks him if he's lost his mind. Wong's stream is shown from his perspective, and the other inmate's is shown from behind between his legs.

Wong violently attacks a group of young children at a school, and one girl wets her pants in fear before being murdered. 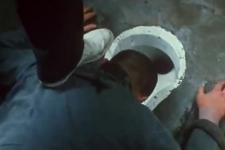