William Munny is a retired, once-ruthless killer turned gentle widower and hog farmer. To help support his two motherless children, he accepts one last bounty-hunter mission to find the men who brutalized a prostitute. Joined by his former partner and a cocky greenhorn, he takes on a corrupt sheriff.

W.W. Beauchamp (Saul Rubinek) is reaching into his bag for a book, and pees his pants when threatened by a man with a gun. The urine is shown spilling out loudly onto the ground around his right foot. 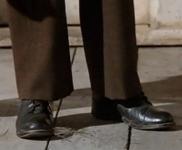