A remake of the 1973 action film of the same name.

Mala (Priyanka Chopra) is desperate to pee, so she makes her chauffeur stop for her to use the restroom. A man comes out of the bathroom and tells her, "It is bad. Very bad." She responds, "This is worse," referring to her bursting bladder. But upon seeing just how bad the toilet is, she runs into the woods behind the restrooms to relieve herself. While back there, she witnesses a murder. No peeing is shown. We only see her rushing into the woods holding her dress, and then returning. 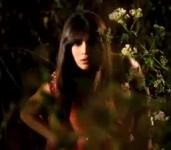