Desperate for companionship, the repressed Willard befriends a group of rats that inhabit his late father's deteriorating mansion. In these furry creatures, Willard finds temporary refuge from daily abuse at the hands of his bedridden mother and his father's old partner, Frank. Soon it becomes clear that the brood of rodents is ready and willing to exact a vicious, deadly revenge on anyone who dares to bully their sensitive new master.

Cathryn (Laura Elena Harring) unzips her pants and prepares to sit on the toilet. The camera cuts away, and when it returns she is standing up and flushing. A longer version of this scene is included in the special features on the DVD, but the director explains that a body double was used because Harring was uncomfortable being shown on the potty. 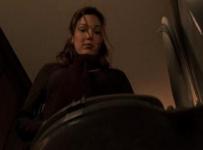